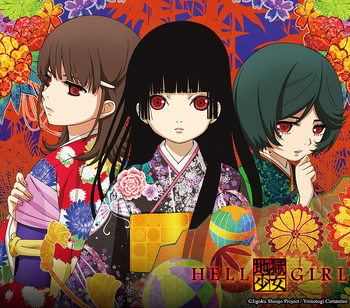 Hell Girl (地獄少女, Jigoku Shoujo) is the title given by the Spider to the dead spirits of girls who misuse their supernatural powers. The job of a Hell Girl is to accept or refuse requests of revenge from humans who access the Hell Link. They are prohibited of using their powers in their own benefit or in humans who have not established the covenant. The covenant with a Hell Girl is formed by untying the scarlet thread from a straw doll neck.

So far, only 3 girls have accepted the title and the job of granting vengeance for those who seek it.

Ai Enma was the first Hell Girl. Main protagonist of the series, Ai and her parents were buried alive as ritual for her village's mountain god, but her spirit escaped from the grave and burned the entire village. Ai was forced to take the position of Hell Girl with her parents souls at stake. At the end of Two Mirrors, she is killed by the villagers of Lovely Hills, after refusing to condemn Takuma Kurebayashi and having her human body sent back to Earth. Ai was helped by Wanyuudou, Hone Onna, Ichimokuren and later by Kikuri and Yamawaro.

Yuzuki Mikage was the second Hell Girl. Main protagonist of Three Vessels, Yuzuki was a normal school girl who was possessed by the spirit of Ai Enma. Eventually, Ai's body was returned from Hell, but Yuzuki started to feel the presence of hatred in people's hearts. Later in the season, Yuzuki discovers that she was already dead for a long time, and the world she was living was just an illusion created by herself. She accepts the position of Hell Girl, but break the rules and is almost banished, with Ai offering herself to replace Yuzuki. Yuzuki was helped Wanyuudou and Akie Takasugi.

Michiru Sagae is the third Hell Girl. Main protagonist of Fourth Twilight, Michiru couldn't remember who she was or how she died, but started following Ai and questioned her decisions of sending people to Hell. She eventually remembers that she was involved in an accident that turned her entire village against her and her parents, who ended up dying in a fire, but in her last moments, she burned the village and everyone on it as revenge. At first, she refuses to become Hell Girl, but eventually accepts it. Michiru is helped by Yamawaro.

Dark Energy: Hell Girl has the ability to hurl large, deadly blasts of black-colored energy. This was first demonstrated when Ai meets face-to-face with the Shibatas, having remembered her past and hatred. Yuzuki also used it in the final episode of third season.

Retrieved from "https://hell-girl.fandom.com/wiki/Hell_Girl?oldid=12124"
Community content is available under CC-BY-SA unless otherwise noted.