The Hell Link (in the dub Hell Correspondence) is the medium of contacting the Hell Girl for requesting her service. Once the Hell Link is accessed and a request is sent, Ai decides whether she would accept the request or not based on a lot of judgmental points. If she does accept the request, she appears to the person who requested her service giving them a straw doll with a red straw on it. Removing the straw creates a covenant between Ai and that person, making whoever he has a grieve on be banished to Hell immediately. But curses come home to roost, making whoever pulled the straw be sentenced to go to Hell too, but only after death.

The Hell Link has actually existed throughout the last four centuries, in other shapes and forms. An old man, Fukumoto, who accessed the Hell Link in his youth, remembered having to find Ai through a personals ad in a newspaper. Only at midnight could those with grudges see the advertisement, and, after having read the address contained in the ad, they would have to write the name of their tormentor on a piece of paper and post it to the Link. In the days before newspapers, those who sought revenge would have to write the name of their enemy on hell ema tablets (small wooden plaques on which worshipers write their prayers or wishes) and leave it at a shrine at midnight. However, as time and technology has advanced, the Hell Girl has changed her methods of keeping contact, and the Hell Link has evolved into an Internet phenomenon. 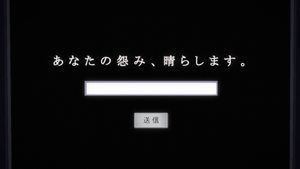 In earlier times, the Link was accessed through a BBS built using BASIC. Currently, it exists as a website where one can enter the name of their tormentor and send it to Ai in hope that she will accept their request and provide her service by taking their target to hell. The website is very simple, with the only contents being a text box for entering the name of the tormentor, a send button below it for sending the name typed in, and a text over the text box saying "Your grievance shall be avenged".

It has been shown that Ai also runs an SMS service in conjunction with her website. She normally uses the SMS service to send a confirmation note to the client. When the text message is received, the screen glows red. The content of the SMS is the message "Your message has been received". This is mainly used for giving the client a reassurance that she, along with her service, is in fact real.

Retrieved from "https://hell-girl.fandom.com/wiki/Jigoku_Ts%C5%ABshin?oldid=11902"
Community content is available under CC-BY-SA unless otherwise noted.