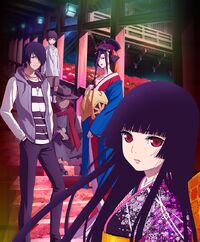 Wanyuudou started life a long time ago as the wheel of a princess' carriage. The carriage was under attack by rogues launching fiery arrows at the carriage, setting the walls on fire as they penetrated. This carriage fell from a cliff, bursting into flames and killing all on board. This tragedy gave birth to the Yōkai, Wanyuudou. It was in this state, terrorizing villagers in the form of a flaming wheel, with his own engorged face as the hub, that Hell Girl found him and contracted his allegiance. From this moment, on Wanyuudou served as Ai Enma's carriage, transporting her from her twilight realm to our own. He will also transform into the black straw doll at Ai's request, his red scarf becoming the red string around the doll's neck.

Ichimokuren appears to be an attractive young man, but in reality he is a tsukumogami, an artifact that gained sentience after it's 100th year anniversary. Ren was once a katana. He has been passed down from owner to owner and has been used mainly for evil purposes. As such, he has witnessed terrifying acts of violence over his long life without being able to stop it. He is found by Ai and Wanyuudou in the remains of a battlefield, plunged into the ground. Ai gains his servitude and transforn him into his current human form. At Ai's request he becomes the blue straw doll, kissing his pendant which becomes the red thread that serves as the link between Hell Girl and the one who accesses the Hell Link.

Hone Onna, also known as the Skeleton Woman, is the last of the three to be recruited to Ai's service. Like Wanyuudou, she too was a yokai, before meeting Ai. In her human years. she was a beautiful young woman named Tsuyu. Tsuyu was betrayed by her lover and sold to a brothel where she tried to secretly rescue another prostitute, Kion. Tsuyu arranged for Kion to flee the brothel with a man who had come to truly love Tsuyu. Both the man and Kion were captured and Kion was forced to watch as Tsuyu and her true love were killed by a samurai and thrown into a river. It was with the bones of all the murdered souls thrown into that river that Tsuyu's soul bound to, transforming her into the yokai Hone Onna, the Skeleton Woman. Hone Onna can become the red straw doll at Ai's request, throwing her red obi over her shoulder as it transforms into the red thread.

Although he is not an original member of the three, Yamawaro also has the ability to transform to a straw doll. Ai's newest companion used to be a mountain spirit. His appearance is that of a young boy, but his true form is that of a boy with mushrooms growing out of his skin. Ai met him much more recently than the others and tries to convince him to join her. Her attempt proved unsuccessful, but he eventually joined her when Ai's spirit came back to the world after her death. At Ai's request, he becomes the yellow straw doll, throwing a rock in the air and transforming as the rock falls.

Retrieved from "https://hell-girl.fandom.com/wiki/The_Four_Straws?oldid=11725"
Community content is available under CC-BY-SA unless otherwise noted.