Welcome to my user page.
If there is anything you want to talk to me about, you can do so on my message wall.

I loved the Jigoku Shoujo series the way it was for the first two seasons. They had their flaws and not everything about them was great, but most of the elements of the series were excellent. Season 1 and Season 2 (Futakomori) are both my favorites, though I feel that Season 2 is better. I entirely disliked Season 3 (Mitsuganae) for the overall plot it had and the sheer stupidity of the characters in each episode, which is to say it felt like a sharp decrease in writing quality. I haven't watched Season 4, but I did wish for more Jigoku Shoujo episodes rather than stopping after Futakomori, just because I wanted some very important questions about the series to be answered through them, and so that the series can have a good, and maybe even a happy ending, instead of the ending that I get each season that leaves a bitter taste for me.

This is an archive of things that I want to preserve for some reason.

Ren Ichimoku from Yoi no Togi

Wanyuudou from Yoi no Togi

Hone Onna from Yoi no Togi

Kikuri from Yoi no Togi

Ai and her companions from the first season

Ai's parents from a flashback

Hajime Shibata from the first season

Tsugumi Shibata from the first season

Tsugumi Shibata from the first season 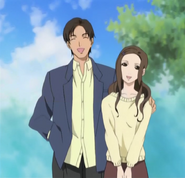 Ayumi Shibata from a past memory